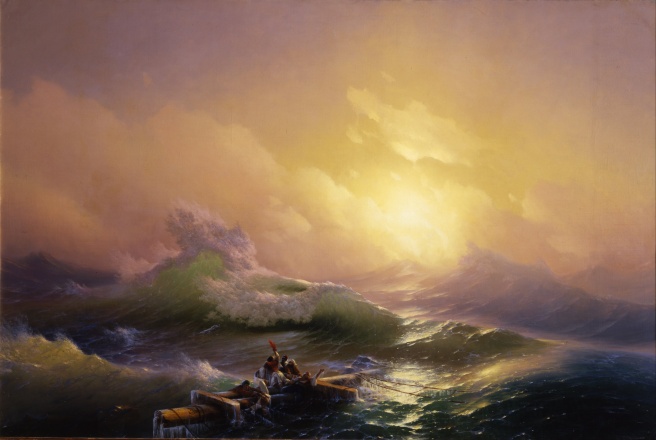 My feet treaded the luminescent water, as I lowered my frail self into the sea.

The full moon silently witnessed my shameful deed, and said nothing. Luna has no need for sinners, I thought. Why stain her cheeks crying for someone like me?

Step by step, each footprint left behind the pain and grief of the bitter tempest of my heart, and the sea, benevolent as it was, washed them away with each sweeping tide. With each step, I whispered my thanks. My soaked cotton dress now clung to me desperately, wet with the tears of the ocean, as if not wishing me to step off this mortal coil. I stubbornly hung on to my resolve, and felt the ocean enclose me in its lover’s embrace as the water reached my shoulders.

These pale shoulders, which once supported a flaxen-haired child, now had no one to support, or lean against another for solace. I was all alone in the world, and the sea was my only friend, either bobbing the lighted buoys contentedly in the water or listening to me pour out my sorrows with unflappable patience every evening. After a while, even the house had gone too.

“Sea, there isn’t any point in keeping me afloat,” I said hoarsely as my body was suspended in the mercurial liquid, buoyed by the high salinity of the water. But the waters ignored my earnest plea, and gently supported my pale body; lapping against my sides, lulling me into a daze. I was not prepared for what came next.

“We will destroy you,” Aeolus and Poseidon whispered amorously, a seductive hum keening in my ears.

A piercing shriek suddenly pierced my ears, and I realized it was my own voice. The winds had unexpectedly risen while I was sunken in my stupor, whipping the waters into a cruel frenzy. I had fallen into the eternal trap of the gale and the sea, and now their astonishing connivance would be my downfall. The salt stung my eyes as I started to struggle against their strengthening collective seizure; casting my eyes wildly towards the coast I realized that there was no one in sight at all.

“There wouldn’t have been anyone, stupid. They raised the wind warning an hour ago.” A part of my mind admonished me harshly, twisting its smile into a sardonic grimace. “You have only yourself to blame.”

The sea roared and tossed its foamy mane, as I was sucked into the dark waters against my will. My lungs rapidly filled with water, and I choked, my head bobbing like the countless buoys in the sea. The salty taste in my mouth reminded me of the horrible pickled mackerel my mum would insist on serving every Sunday for dinner, as a child. From then on, I grew to hate the taste of fish, although it did not deter me from entering the water and learning how to swim.

The mercurial element of water had always captured my innocent imagination, with its unfathomable, murky depths. I loved how chameleon-like the sea was. It could be anything you wanted it to be, as long as you arrived on the right day with the right weather. The thinnest of silver cloaks, stretching as far as the eye could see, on a balmy afternoon, its surface broken only by the frolicking fish underneath the waters. The seething, roiling serpentine tides in a storm, likened to a lover’s rampage. A tranquil cerulean greeting visitors with its demure image, sparkling beneath the effervescent sky.

And so, a cordial relationship between me and the sea was established, which deepened into a genuine affection. It was always there for me, like a substitute for an absent best friend, throughout the days when I was ostracized at school for being different from the other kids. Comforting me when my boyfriend left me for yet another blonde, popular girl in high school. Being a source of quiet encouragement the day before I started my first job at a government office, telling myself that I was about to earn my first keep as a wholly independent woman. Congratulating us silently, with my newly married husband in tow, on a trip to the beach. Smiling at us serenely, the day I learnt of my first pregnancy. When I learnt that my husband and little girl had succumbed to their cruel fate in an airplane crash, the sea was also there for me, its stillness more than enough as my grief sundered my soul apart, breaking it into a million tiny pieces.

So I could not understand this artful double-cross of the sea and the winds. I never had a single request for them at all. I never wanted anything else, other than the tranquility of the waters. Then, all of a sudden, these thoughts flashed in my mind.

Had I asked for too much? Was this the sea’s answer to my incessant clinging? Or had it grown tired of me instead?

…Or was it demanding more than what I was prepared to give?

The burning pain of the betrayal manifested as repeated echoes of “Why? Why? Why…”, spiralled in my brain. Poseidon’s gracious flutes of water weaved themselves around my throat, dragging me down into the watery depths that I could only dare to imagine as a kid. My body naturally twisted itself, trying to swim and release itself from the water’s firm grasp, but a sharp pain exploded in my right leg. My body was racked by Poseidon’s wantonness, his brutal, hydrous fingers invading every pore of my flesh and being, his savage kiss forcing my desperate mouth open, which was so hungry for air. I gulped in more water instead, moving towards his objective, instead of my own goal of keeping myself alive.

With each futile wrestle, I was slowly being taken over. Somewhere in my mind, a part of me gradually accepted, and succumbed to this ultimately doomed love. My limbs stopped moving of their own accord. My vision was blurring, with little black dots appearing everywhere I looked. I could feel my eyelids flutter, struggling to keep myself conscious, but the watery fog of Neptune took hold of my consciousness.

The last thing I saw before I blacked out, was the serene, watery moonlight shining on my face.

I write. View all posts by DeanJean